Check us out at https://www.SwankyBarEvents.com

Our owner, Kevin M. Horton is an established actor and comedian, appearing in film and television as well as touring the country doing comedy shows. His ‘Laugh As You Learn’ method towards Luxury, Liquor, and Leisure earned him a hosting gig at the 2018 Catalina Wine Mixer and dozens of corporate conferences around the world.

A Swanky Wine Tasting focuses on audience-engagement, pairing Comedy, Games, and Trivia with a multi-media presentation on all of our delicious wines to create an experience that's just as relaxing as it is informative.

As an actor, Kevin most notably starred in “American Pie Presents the Book of Love” for Universal Studios, along with a handful of guest-stars on prime-time, Disney, and Nickelodeon. As a comedian, Kevin’s performed on cruise ships, corporate conferences, and clubs like The World Famous Comedy Store and the Hollywood Improv. He was classically trained in Mixology by Hillstone Restaurant Group and added his patented ‘performance-element’ behind the bar at the infamous Barney’s Beanery in West Hollywood - where he DJ’d and hosted their celebrity karaoke, all while mixing drinks. Kevin’s rolodex of entertainment big-whigs helped launch Swanky Bar Events into quickly becoming Southern California’s premiere cocktail catering company; providing cocktail programs for studio-galas, fundraisers, and celebrity private parties.

Receive the latest news direct from the wineries, delectable recipes that pair perfectly with your wine, current specials on fabulous wines, and so much more!

If you’re interested in booking a Boisset wine tasting or learning more about the Boisset opportunity, please fill out the form below and you’ll be contacted by your Wine Ambassador. 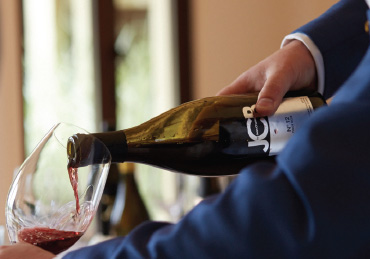