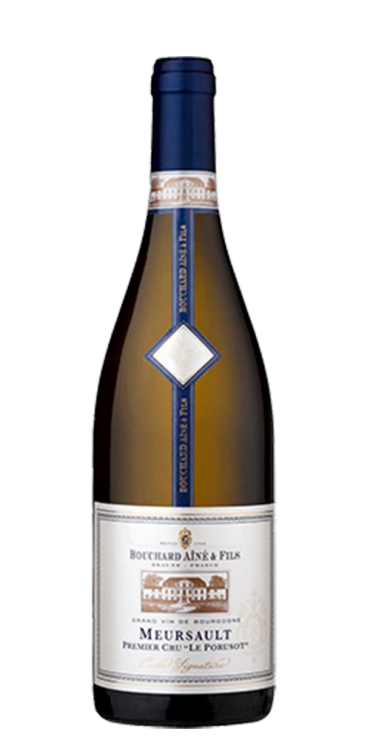 The Terroir de Bourgogne range is a selection of reputed single vineyards Villages, Premier and Grand Crus from Côte de Nuits and Côte de Beaune principally. They are produced in very limited quantities, as a sign of the special care we put into their production.
This village appellation from the Côte de Beaune,marks along with Puligny-Montrachet and Meursault one tip of the Golden Triangle. This area produces one of the most famous white wines in Burgundy, which represent about 2/3 of the total production. Meursault
takes its name from the village of Meursault. The vineyards extend over 396 hectares of which 96% produce white wine and 27% are ranked as Premier Cru. The Premier Cru “Le Porusot” covers about 10 hectares and enjoys a south-eastern exposure, which is perfect for a maximum amount of sunlight. The name Porusot comes from the very nature of the soil; indeed, the word is a regional way of naming a place covered with rocks. It is the diminutive of Porroux which finds its origin in the latin word Petrosa (stony place).

Frank with notes of white fruits such as pear and white peach.

Our dearest Burgundy region could be the embodiment of that famous motto: Fluctuatnec mergitur...because for several years now it's been suffering the whims of the weather and has always been capable of producing great wines out of it. Once again, the vintage 2016 will be a tangible proof! Everything started from a very mild winter...maybe too mild to be honest. Actually, we should have been more wary of that sign for it was the warmest winter the region was going through since 1900. Sometimes the gap in the temperatures compared to the seasonal norms exceeded a 100%. In addition, the rain fell in excess particularly in Côte d'Or and as a consequence the lack of sun was really important.

Winter really came 3 months late, in March, but didn't settle as the bursting of the first buds appeared at the beginning of April. So, as spring really settled, it also brought its share of climatic disasters: first, it was a hail storm that hit the South of the Mâconnais
region; then, the most tragic freezing night in April, 26 th stroke almost all the region from the Grand Auxerrois to Côte Chalonnaise; and finally, 2 more hail storms on the 13th and 27th May lashed over Chablis, leaving the region with almost no hope of harvest.

This year, until summer, we went through very difficult times and had to hope for the vines to find the strength to grow again. Somehow our wish was granted, and the vegetative cycle started again, with great gaps from one plot to another. Due to all the climatic events, the flowering came late (mid-June) but didn't last long thanks to hot temperatures.

From the month of July, the extremes reversed: the temperatures as well as the amount of sunshine exceeded the seasonal norms. Fortunately for the grape, it lasted until the end of October, allowing for a good maturity. Harvest began on September, 20th and spread over a month thanks to the great weather conditions, leaving us the opportunity to harvest each plot at its best. Finally, the grapes we harvested were of great quality and although the plots hit by hail or frost gave almost nothing, the other had good yields.
During the vinifications, the vintage quickly revealed its high quality. We are expecting the wines to be well-balanced, with a good structure and a lot of freshness as well as finesse.